a short summary of our past events

Today DBA organized a introduction breakfast for Arjen (new consul) and the Dutch community in Istanbul. This is one of the cooperations with NVI of which we will see more in the future.  Perfect place “Le Cuistot Bistro by Chef Carlos” 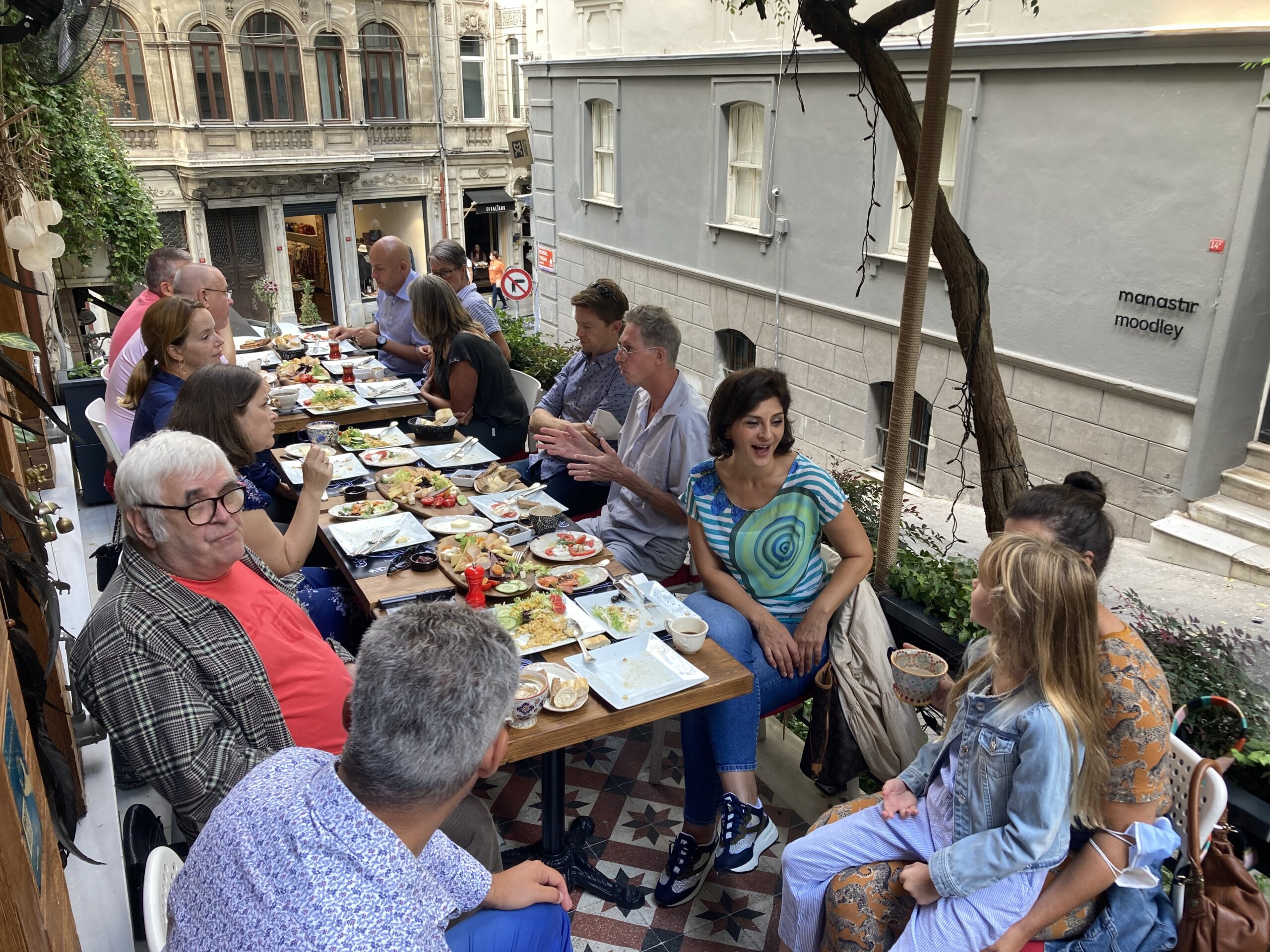 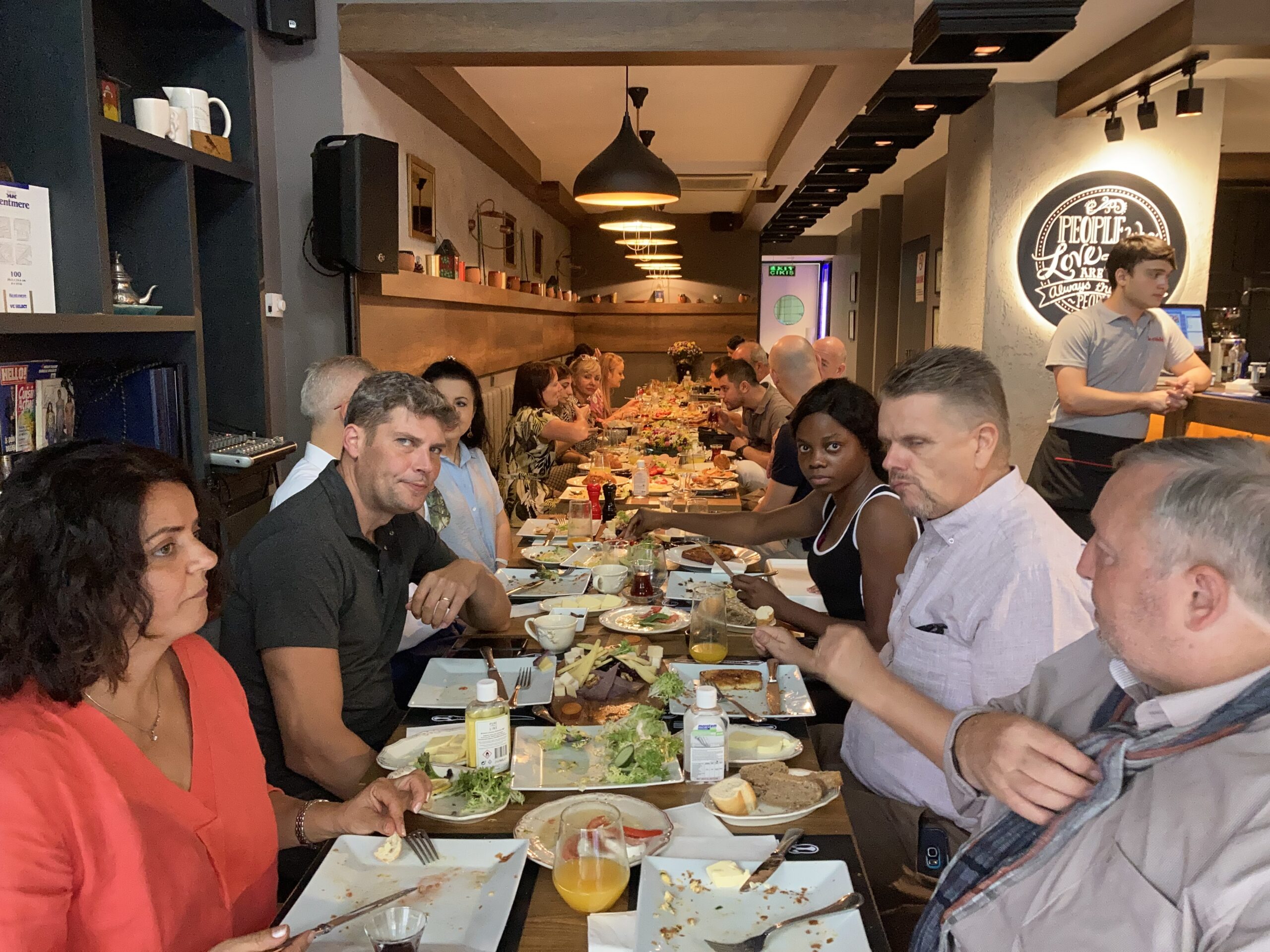 On August 17th we had the pleasure to have one of our face to face events at the consulate in İstanbul. This event was part of our warm welcome for the 65th Consul General of The Netherlands Arjen Uijterlinde to İstanbul and farewell for Bart van Bolhuis. İn the presence of the ambassador of the Netherlands in Turkey, Marjanne de Kwaasteniet, The board members of the Dutch Business Association and other high valuable quests, speeches were made to highlight the actions from Bart and to welcome Arjen

Bart van Bolhuis was Consul General during the past 4 years and will move to The United States, we wish both Bart and Arjen a lot of success with their new assignments. 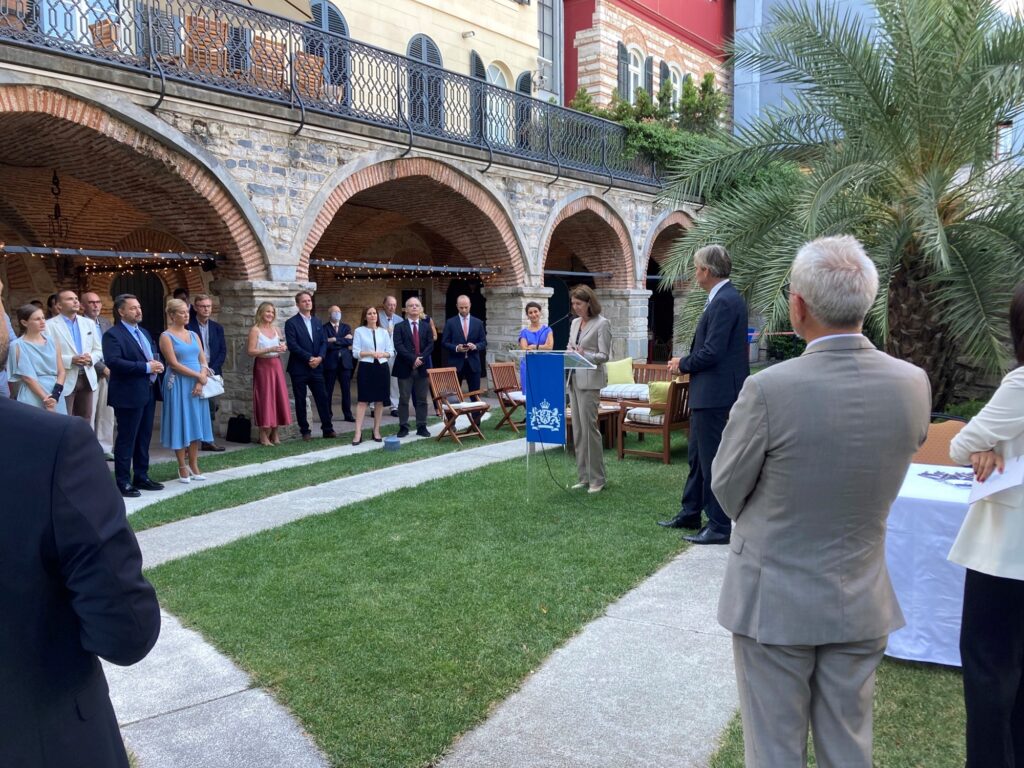 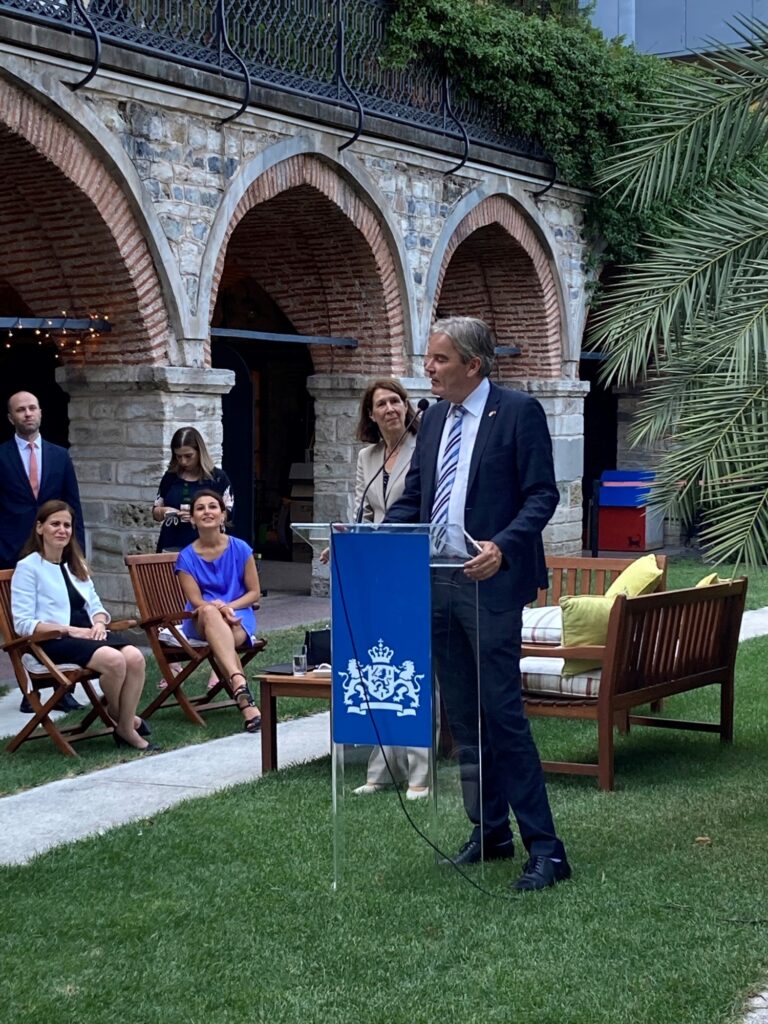 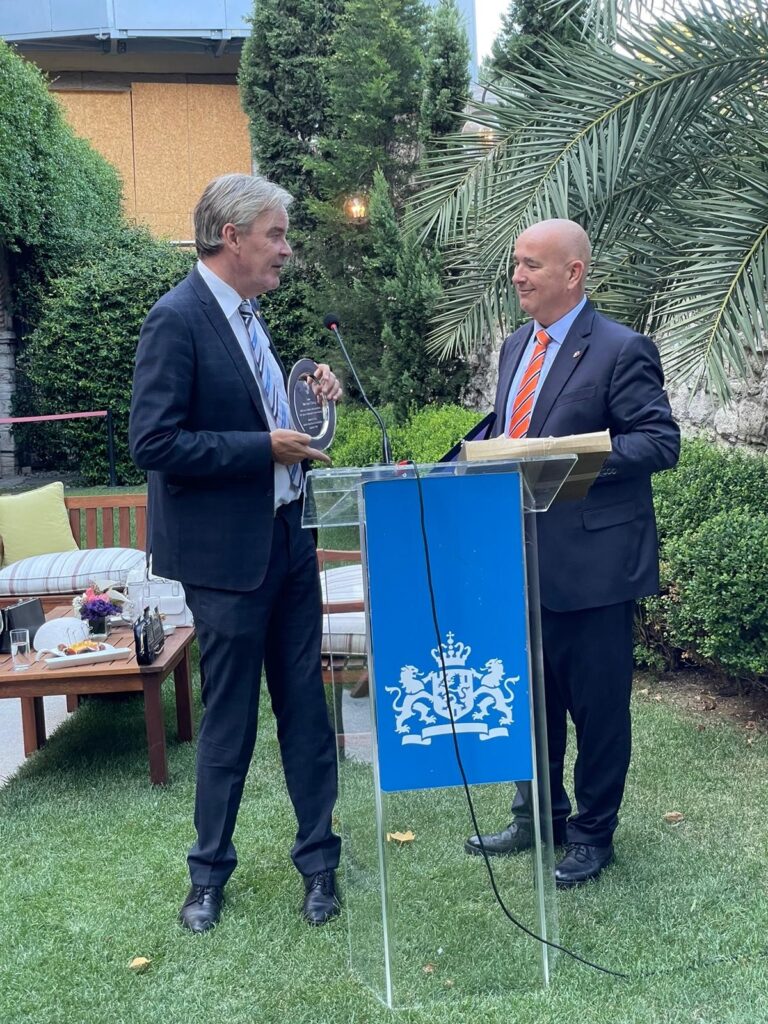 ”International Travel Regulations & On-site Covid-19 Testing Services” many regulations when traveling thru the world nowadays. Eurocross monitors all the regulations and brings a solution for 24 hours PCR testing. For more information please visit the website of Eurocross

Today DBA will be present at the “Sustainable Development Goals Bike Tour” coordinated by the Dutch Consulate and Danish Consulate Generals. 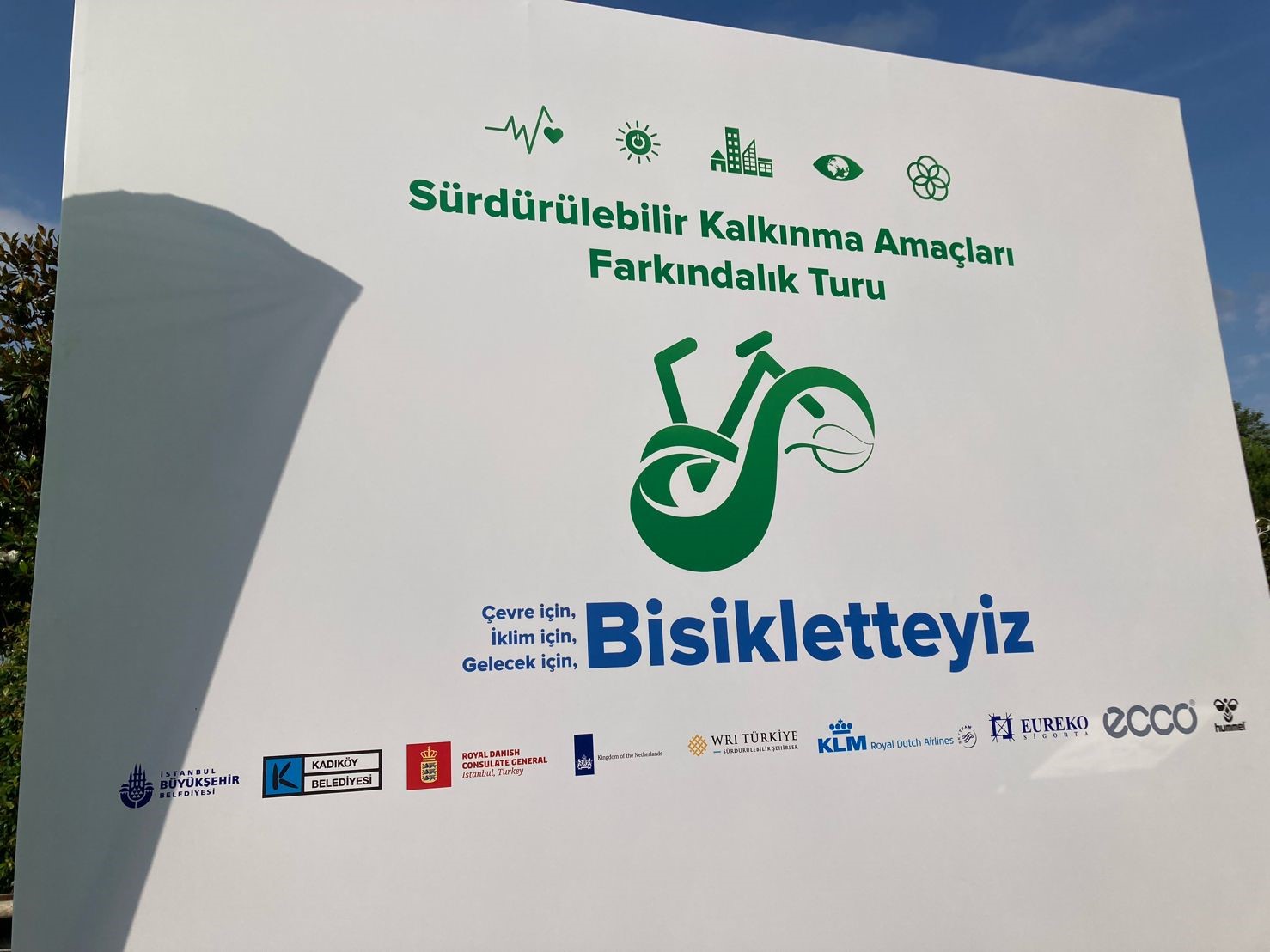 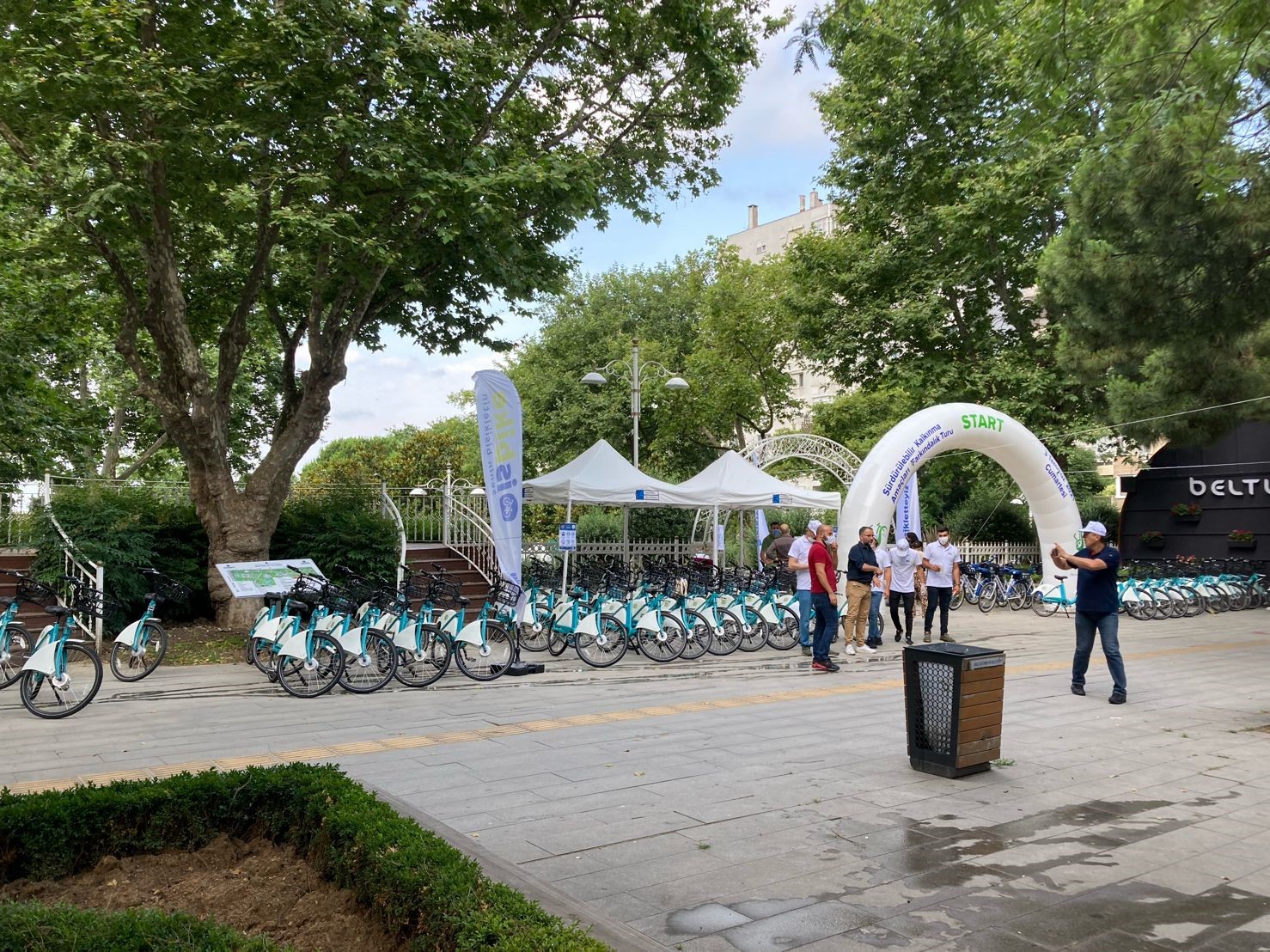 DBA Members, Eureko sigorta and KLM sponsored this event, the bicycles were provided by ISBIKE. ISBIKE can be rented throughout entire Istanbul, check here the information from ISBIKE

Today, we had the pleasure of hosting the webinar on “Economic Outlook for Turkey. The webinar started with opening remarks by our Chairman Gregor van der Mark
We would like to thank our guest speaker, top economist Dr. Murad Kayacan (CPA) for sharing his valuable insights for Turkish economy. Also warmest thanks to our audience for participating our webinar.
Keep following us for our upcoming webinars. 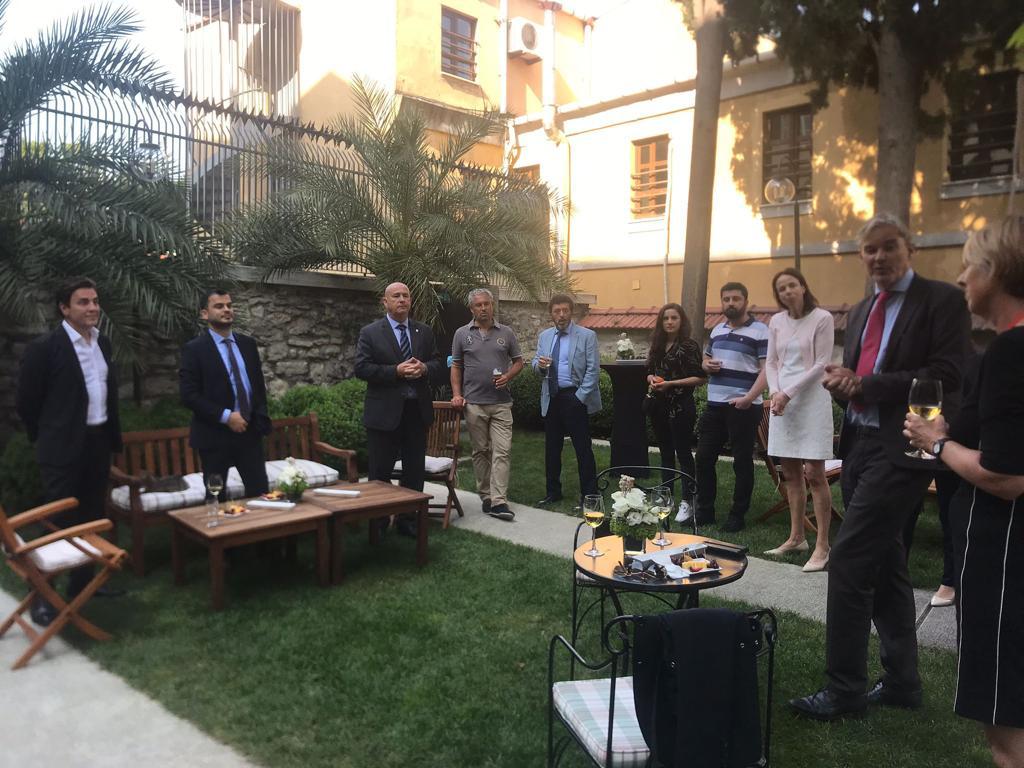 Startup Ecosystems in Turkey & the Netherlands and Talent Acquisition

entrepreneurs and bright minds. The Turkish government is a very active and strong supporter of the Startup ecosystem in Turkey, offering a variety of programs and policies to enable the establishment and growth of Startups.

With investment and financing of these initiatives, Turkey is becoming a hot spot for future Startup ecosystems worldwide.

We are happy to organize ‘’Startup Ecosytems in Turkey & the Netherlands and Talent Acquisition’’ webinar  in cooperation with Consulate General of the Kingdom of the Netherlands in Turkey, Startup Amsterdam, Eduned and KWorks. 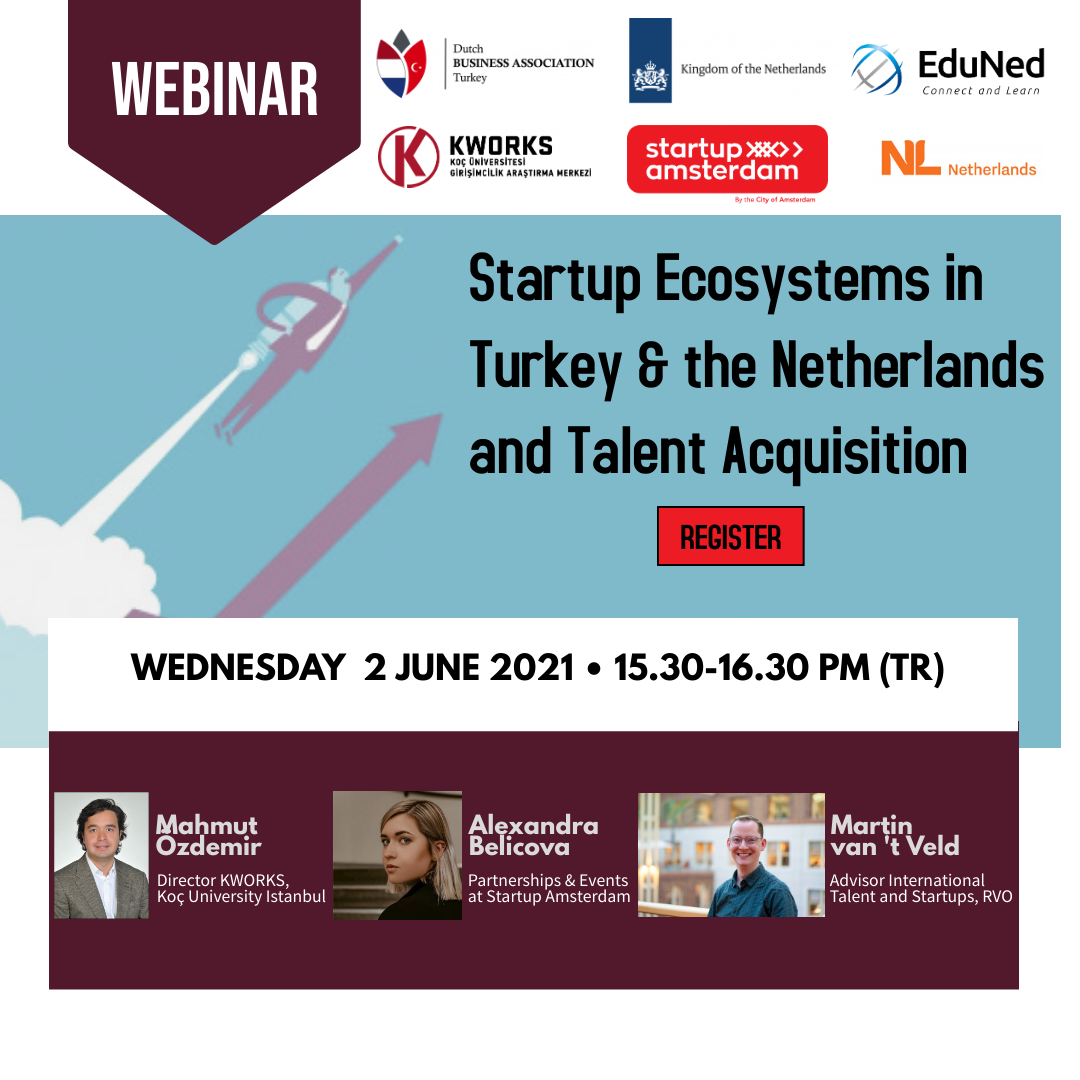 The Dutch Consulate General in İstanbul organized an exhibition to sell ceramics made by Thessy Ries and other ceramic artists.

All donations will be used to improve the living conditions of the stray animals of İstanbul. DBA Turkey is happy to make a donation to the chosen charity Yedikule Hayvan Barınağı.

We would like to thank Thessy Ries for this wonderful event, our Consul General Bart van Bolhuis for hosting the exhibition and our Board members Nurdan Erbuğ (Anadolu Hayvancılık) and Korkut Yetkin (Asya Lale) for sponsoring. 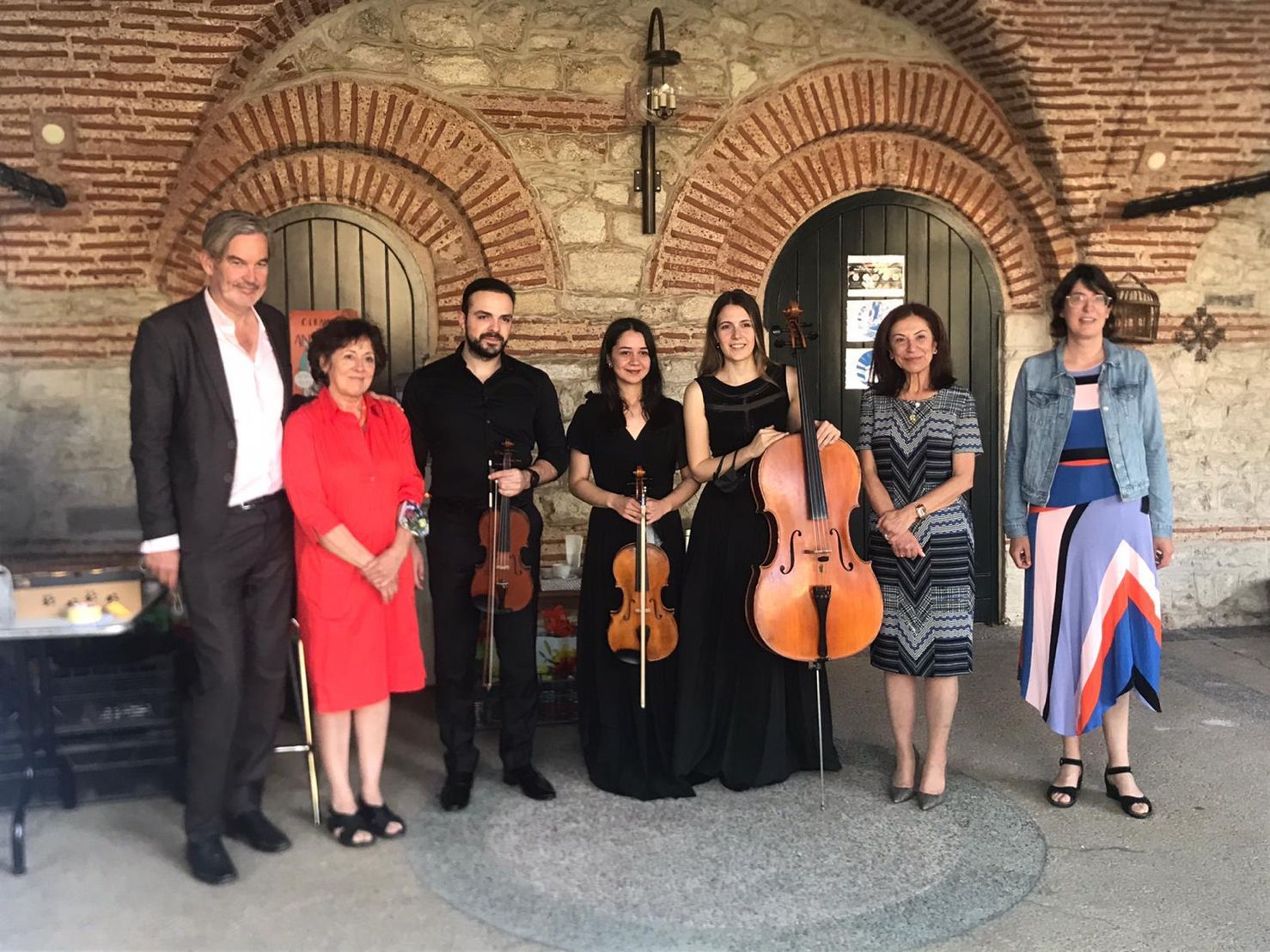 Exp. Nutritionist Begüm Kurt and Sr. Business Development Director at Healthy Fit Figen Çınarlı talked about eating habits and nutrition questions such as how to eat to strengten the immune system and control you diet during pandemic. 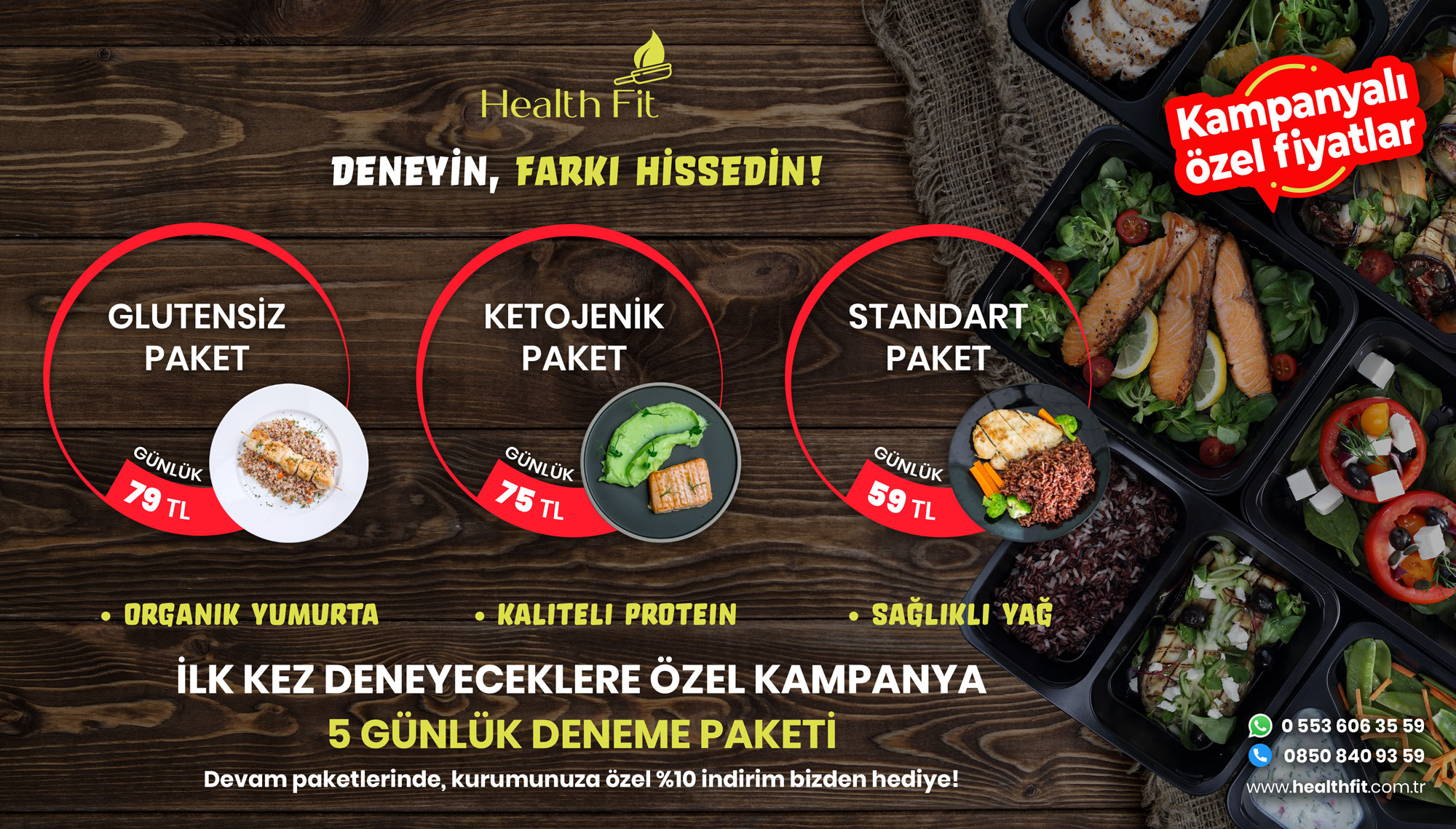 JOINT POSITION PAPER PUBLISHED FOR THE MODERNIZATION OF THE CUSTOMS UNION

German-Turkish Chamber of Commerce and Industry (AHK Turkey) highlighted the importance of the Customs Union in a joint initiative between TOBB, TEPAV and the Bilateral European Chambers.

Following the keynote speakers H.E. Nikolaus Meyer-Landrut – Ambassador, Head of Delegation of the European Union to Turkey and H.E. Jürgen Schulz – Ambassador of Federal Republic of Germany and Jane Grady – Deputy Her Majesty’s Trade Commisioner; Sibel Güven – Program Director from TEPAV made an introduction of the Customs Union Position Paper. 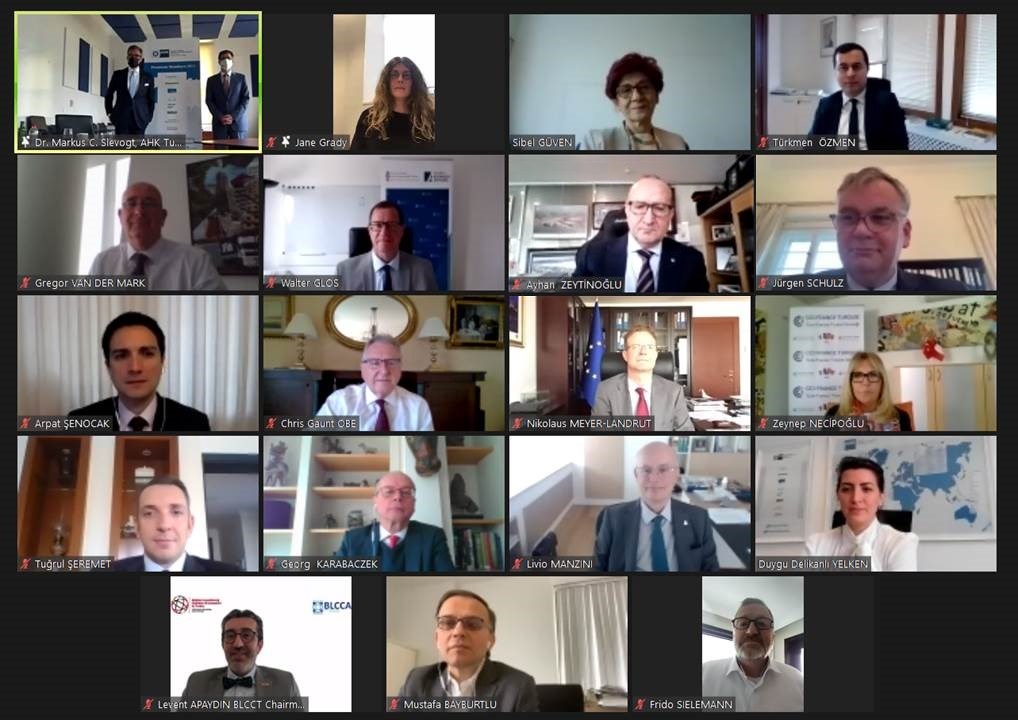 Dr. Markus C. Slevogt, President of the German-Turkish Chamber of Industry and Commerce said: „The customs union is an integral part of German-Turkish trade relations. It serves as a catalyst for growing prosperity and enhancing economic development in Germany and Turkey alike. Therefore, the modernization of the Customs Union is an important step in order to strengthen the already deeply rooted relationship between these two countries and to prepare it for the challenges of the upcoming decades.“

Levent Apaydın, President of the Belgian-Luxembourg Chamber of Commerce in Turkey said: “The depth and scope of the Customs Union should be addressed to meet the requirements of the global economy. Upgrading the existing Customs Union provides a potential for a better and stronger Turkey-EU partnership and of course a better and stronger Belgian/Luxembourg – Turkish partnership in every aspect as it was the case two decades ago. There is no doubt that such achievement will create a ‘win-win’ situation for both sides in economic terms and will increase Turkey’s ability to better harmonize its trade and economic policies with the EU, in a time of intensifying, global cutthroat competition, with financial volatility and turbulent waters globally.”

Georg Karabaczek, Austrian Trade Commissioner for Turkey stated: “Our survey of Austrian Companies active in Turkey shows that 76% of the CEO’s expect positive effects on their business from a modernized and deepened customs union between Turkey and the EU.”

Livio Manzini, President of Italian Chamber of Commerce and Industry in Turkey commented: “Turkish Italian trade relations are maybe the oldest ones as well as being one of the largest and more balanced one Turkey has with any other country.  Over time we have witnessed how expanding commercial ties have always gone hand in hand with closer and better bilateral relations creating a virtuous win-win cycle. To rekindle the momentum of closer integration now is the time for a bold initiative on the commercial front by modernizing and deepening the customs union agreement.”

Zeynep Necipoğlu, President of French Chamber of Commerce in Turkey said about the customs union: “Turkey is the EU’s fifth largest trading partner, while the EU is Turkey’s largest. French business actors see Turkey as a potential hub to develop activities in the Middle East and Central Asia. The modernization and the upgrading of Turkey-EU Customs Union, represent an opportunity for enhancing the economic integration between Turkey and EU countries. The French-Turkish business communities strongly support the encouraging actions.”

Chris Gaunt, OBE, President of British Chamber of Commerce in Turkey added: “Given that Europe and the Global economies will have to reset and adjust according to the new normal post Covid, an enhanced customs union agreement for Turkey will provide the impetus to re-engage with the EU single market and generate increased bilateral trade and economic prosperity.”

Arpat Şenocak, President of the Swiss Chamber of Commerce in Turkey stated: “The Swiss-Turkish business community is a strong supporter of the modernization of the Customs Union. Based on the encouraging steps taken in the context of the renewal of the Free Trade Agreement between Turkey and the European Free Trade Association (including Switzerland), we believe that improving the framework for trade between the EU and Turkey would certainly bring mutual success and benefit for both parties, and help building a stronger dialogue.”

Gregor Van Der Mark, President of Dutch Business Association Turkey said: “From business perspective, The EU Customs Union Agreement needs to be updated to the same level as the business is tomorrow this to ensure a better future for all.” ” The Global Impact of the Dutch Elections” by NLinBusiness

The Netherlands is a country with a strong focus on export. The outcome of the upcoming Dutch elections (15-17 March) will significantly impact international business activities. Thespeech of Ingrid Thijssen, president of VNO-NCW, who will reflect on the elections’ results and its impact on doing business internationally, will be followed by a panel discussion with experts such as Cees Westera, Managing Partner at Public Matters, Rem Korteweg, Senior research fellow at the Clingendael institute and Frank Heemskerk, Secretary General European Round Table for Industry, who will shine their lights on the election outcome from different perspectives. DBA organised  “Economic Outlook” webinar in cooperation with ING Turkey. We would like to thank guest speakers Chris Turner and Muhammet Mercan for sharing their forecasts for the global and Turkish economy. Also, many thanks to our Chairman Caspar van Haaften for hosting our webinar, our Board member Ayşegül Akay for her supports and all participants for joining. Scrum is a framework within which people can address complex adaptive problems, while
productively and creatively delivering products of the highest possible value.

Scrum itself is a simple, lightweight yet difficult to master framework for effective team
collaboration on complex products.

Since it was first presented by Ken Schwaber and Jeff Sutherland in 1995, use of Scrum has
spread widely in the world and 14th Annual State of Agile Survey in 2019 shows that 76% of the
participants are using Scrum or combinations of Scrum with other methods for their Agile product
development.

Tolga is a trainer, Agile coach and consultant, keynote speaker with 16
years of prior hands-on software development experience in the finance
sector. For the last decade he has been training, coaching Agile teams
and consulting various companies in their Agile transformation journey.
He has taken role in various companies’ Agile transformations from
small-middle enterprises to 10,000+ people big organizations supporting
governance, Agile Leadership cultivation and team level Agile way of
working.

Tolga is one of the 300 Scrum.org Professional Scrum Trainers in the world and one of three in Turkey. He is also an ICAgile Accredited Trainer.